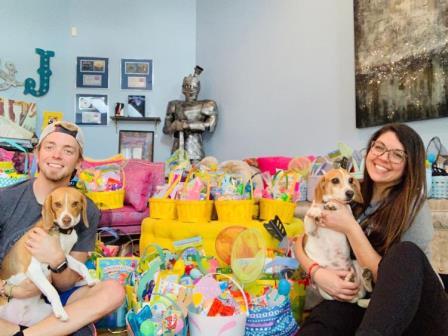 Thank you Glasgow Daily Times for the article!! We appreciate you and everyone who helped make this happen!!

GLASGOW – Ben and Jessica Wells created a nonprofit foundation in 2019 that they named after their beagles, Henry and Clark.

The Glasgow couple developed the foundation with the hopes of creating awareness about a variety of issues and to help various causes.

In March, they raised money through the foundation to benefit shelters in Tennessee for those affected by the tornadoes.

“Ironically, Ben and I had been trying to think about something we could for kids while the coronavirus pandemic was going on,” said Jessica Wells. “I checked my Facebook one night and Mica Pence, the family court judge, had made a post about ‘Hey, is anyone doing Easter baskets?’”

The need for Easter baskets for area children “kind of rang a bell” with the Wellses and they knew it was a project they wanted to undertake for their foundation.

“It kind of snowballed from there,” Jessica Wells said.

Originally, the foundation was scheduled to do a fundraiser for Bridge Kentucky at Ralphie’s Fun Center along Happy Valley Road in March, but couldn’t due to the bowling alley being closed because of a mandate from the governor’s office requiring all non-life supporting businesses to close during the coronavirus pandemic.

Bridge Kentucky is a nonprofit organization that works to keep Barren County families from being homeless and children from entering either foster care or state care.

The Wellses decided to substitute the Easter basket fundraiser for the one at the bowling alley.

“It is for kids who might not normally get an Easter basket, or their parents weren’t able to put one together because of the state of the world,” said Ben Wells, a guitarist with the popular rock band, Black Stone Cherry.

The Wellses bought large and medium-sized baskets and filled them with candy and other items.

The couple announced the Easter basket project last week on Facebook and Instagram and had an overwhelming response. Initially, they were only planning to do 20 Easter baskets.

“We thought if we could sell 20 baskets that would be great,” Jessica Wells said. “When we shared it online, … by Saturday we had over 60 something baskets that were either being sponsored and/or purchased for families.”

The couple went to every store they could think of in the Glasgow area to buy baskets and items to put in them all the while being mindful to social distance.

As of Wednesday afternoon, they had sold all of the baskets and raised more than $1,000 for Bridge Kentucky.

The couple is also offering to allow people to pick up the Easter baskets or have them delivered this weekend.

“It’s just been overwhelming to see how much support we’ve gotten from it so far,” he said.

Patrick Gaunce with Bridge Kentucky said the organization has done well for its first year.

“So far in the first year, we have kept over 50 families from going homeless and over 100 children from going into foster care or state care,” he said.

The Wellses have volunteered for the Boys and Girls Club of Glasgow-Barren County in the past and also ran the Room at the Inn for the homeless population last winter, Gaunce said.

The money donated by the foundation to Bridge Kentucky will be used to continue the work the organization does in helping disadvantaged families and those who are in need, he said.

“We are just a very appreciative recipient of their generosity,” Gaunce said.

Anyone who would like to make a donation to Bridge Kentucky through the Wellses’ foundation can do so through a PayPal account. The email to the PayPal account is henryclarkfoundation@yahoo.com. Donations will be accepted through Thursday.